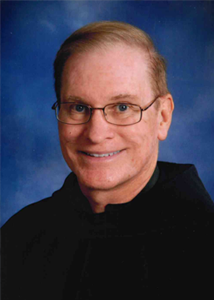 Fr. John Mark Klaus, TOR, from Mount Pleasant, Pennsylvania, is a Franciscan priest of the Third Order Regular of St. Francis, Sacred Heart Province located in Loretto, Pennsylvania.  He joined the Franciscans in 1989 after a career as a school music teacher and Director of Music in several parishes in the Dioceses of Greensburg and Harrisburg, Pennsylvania.  He holds degrees in music, liturgy, and theology.

He ministered in parishes as a priest for ten years as Parochial Vicar at St. Andrew Parish in Fort Worth, Texas, and at Our Lady Queen of Martyrs Parish in Sarasota, Florida.  He was also the Director of Worship for the Diocese of Venice in Florida for seven years.

Fr. John Mark was the head of the Campus Ministry Division and on the board of the National Association of Pastoral Musicians speaking at national conventions. He gave numerous workshops in liturgy and music and had articles published in newspapers and magazines. He was the Provincial Secretary for the Sacred Heart Province Council and served as regional minister in both Florida and Texas for the TOR community.

return to Our Staff